The Freemen of Norwich Timeline

Charter of Richard I grants Norwich citizens the right to govern the city.

A charter grants Norwich county status - with an elected mayor 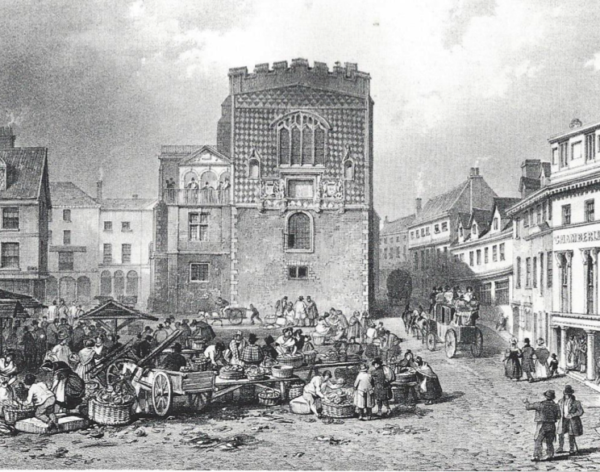 Henry VIII grants the Town Close lands to the freemen

Norwich second city in the kingdom

Strangers from the Low Countries invited to work in Norwich

Town Close enclosed and let to farmers, 1700-1834. Freemen enjoyed the income, surplus given to the poor

City Council develops the Town Close Estate on behalf of the freemen.

Charity extends grant awards to other charitable bodies within a 20-mile radius of Norwich, including Wymondham Abbey (pictured).

700th anniversary of the Freemen’s Registers

A turning point for Norwich and its townspeople was the charter granted by Richard the Lionheart in 1194 to fund his crusades. The charter agreed that in return for an annual payment to the Crown, the ‘citizens’ had the right to be free of tolls throughout England.  They were allowed to collect and administer the income of the city from tolls, rents and profits of the borough court.

1205
Freemen and the Town Lands

Long before Freemen appeared on the scene, the townsmen of Norwich enjoyed the grazing rights of a great area of common land stretching from St. Stephen’s Gate to the villages of Eaton and Lakenham. Sometime after the Norman Conquest, the first Norman bishop Herbert de Losinga had secured the grazing rights from the King to help support his new cathedral and Benedictine priory, sited provocatively in the centre of the old English town. Thus began a dispute over the ‘Town Lands’ which was not fully resolved until the late nineteenth century.

The rapidly rising population of Norwich in the late 13th century placed all sorts of pressures on the city authorities. The Great Riot of 1272 between the Cathedral and the townsmen left the city badly shaken. There was clearly a need for the authorities to assert their control and protect the city from further social disorder, the destruction of property and possible attack from outside.

The earliest freeman recorded in the Old Free Book is ‘Walter Fleighe, butcher’ [Latin entry: Walterus Fleighe, carnifex].  This is the first name which heads the list of those recorded under the heading of ‘11th year of the reign of King Edward II, in the time of William But, Robert de Lopham, Peter de Bumpsted and Robert de Wilby, bailiffs of Norwich’. (The regnal year of 11 Edward II ran from 8 July 1317 until 7 July 1318).

1404
A charter grants Norwich county status - with an elected mayor

By the charter of 1404, Norwich became a county in its own right.  To bring the city government into line substantial changes had to be made.  Two sheriffs replaced the four bailiffs and presided over monthly county courts, while a mayor took responsibility for city administration. With four reputable men, the Mayor also exercised the office of justice of the peace in the Mayor’s Courts.

After the Black Death in 1348, the city authorities intervened directly to support the economy, buying up empty market stalls and shops. In 1384, they established a Cloth Seld or covered market, similar to an Eastern bazaar. These ventures raised money to finance public buildings. The most conspicuous example from this period is the Guildhall, built between 1407 and 1414, to house the new system of government established after 1404.

1524
Henry VIII grants the Town Close lands to the freemen

After many years of negotiation between the city and the Priory, Cardinal Wolsey mediated a settlement in 1524 whereby the city surrendered its claim to the grazing rights of Eaton and Lakenham, and in return the Priory granted ‘to the mayor, aldermen, citizens and commonalty of Norwich’ eighty acres of land in Eaton – in fact, one hundred and eleven acres – which was to be enclosed.   In this way, they created the ‘Town Close’ that triangle of land bounded by the Newmarket, Ipswich and Eaton roads which became such a great asset to the freemen of Norwich, see Faden’s map above, showing the triangle occupied by ‘Ives Esq’.

1525
Norwich second city in the kingdom

The charter of 1417 ushered in 250 years of relative harmony in Norwich government and society. This was no mean achievement in a period of recurrent crises, and in marked contrast to other large towns. All suffered from the plague, declining markets, foreign competition, the impact of the Reformation and rising poverty, but Norwich proved the most resilient and enterprising. By the 1520s, if not before, it was the second largest city in the kingdom, up from fifth in 1377, and ahead of its old rivals Bristol and Newcastle. York had plummeted from second to thirteenth position.

1565
Strangers from the Low Countries invited to work in Norwich

Migration was a key factor in Norwich’s prosperity at this time. Faced with recession in the great cloth making industry, Norwich diversified into the more popular light-weight cloths produced in the Low Countries, by encouraging Protestant refugees, fleeing from persecution, to settle and practice their craft in Norwich. First licensed in 1565, inward migration rose rapidly and greatly increased economic activity with new skills and technology.

Having acquired the Town Close the freemen found it difficult to control and exclude trespassers.  In 1698, to sort out this problem, the mayor and aldermen set up the City Committee which became responsible for its management for the next two hundred years.

In 1700, it let the Town Close to three butchers and distributed the income to the freemen and their widows and gave the surplus to the poor.  In 1750, the property was re-let to a farmer with the condition that he built a good quality house.

Bristol was a key trading port, thanks to its position on the River Avon. The Roman army had a port here 2,000 years ago. This major port allowed Bristol thrive economically and eventually overtake Norwich as the second city in England after London.

Trade was mainly in woollen cloth produced from the surrounding counties of Somerset, Gloucestershire, Devon and Dorset. Bristol’s merchants had been trading overseas from at least the 11th century. Bristol also had a shipbuilding and financial industry, as well as a network of merchants with contacts in Europe and beyond.

The Great Reform Act, the first of its kind, is followed by the Municipal Corporations Act, 1835, which abolishes the remaining political rights and privileges of freemen. As an afterthought, it allows them to keep their lands.

1840
City Council develops the Town Close Estate on behalf of the freemen.

By the time Jeremiah Ives’ lease expired in 1834, the City Committee had already decided to develop the estate as a fashionable suburb. To this end the estate was broken up and let in parcels on seven year leases. Town Close House, with eight acres of land, was let as an academy while the remaining fourteen lots were let for agricultural and garden use.  Several lots were acquired by speculative builders. Over the next fifty years, the estate was developed in phases by the City Committee, and rents continued to rise for the freemen to enjoy.

Questions had been asked about the freemen’s rights to the property and its income, since the 1850s.  The matter came to a head in 1884 when the City Council under pressure from various parties refused to distribute the freemen’s annual dole. The freemen led by Walter Rye and John Stanley challenged this decision in the courts and won their case in 1887.  On appeal, in 1889, the judges again found in their favour, but created a charitable trust for the benefit of the freemen in 1892 under the control of the Charity Commission.

1907
Formation of the Freemen's Committee

The primary purpose of the Freemen’s Committee is to assist in the management of the charity. Every five years, it holds a Common Hall of freemen to elect eight representative trustees to serve on the board of the charity. The committee is also a focal point for the freemen body.

As their income from the Town Close Estate increases in the 1970s, the freemen ask the Charity Commissioners to extend their remit and make grants to other charitable bodies in Norwich, principally for educational purposes.

After the Second World War, the Town Close Estate suffers acutely from a backlog of repairs and a legislative climate hostile to landlords which culminated in the Leasehold Reform Act, 1967. As tenants purchase their freeholds, attention turns to the cost of maintaining the older, larger and more prestigious houses. In 1980, the freemen make the decision to sell the old houses as they become available.

The accounts show that since 1984 much of the charity’s income has been ‘gifted to other bodies’.  The amount has varied from year to year, but the five-yearly averages are remarkably consistent, with the highest being 61.4 per cent, of disposable funds, in the early 2000s, and the lowest 53.2 per cent in the later 2000s, reflecting the periods before and after the financial crisis of 2007-8.   The remaining five-yearly averages range between 56 per cent and 58.8 per cent.

2010
Women admitted to the Freedom

In March 2010, ‘more than 200 women proudly overturned centuries of discrimination as they were finally admitted as Norwich freemen … ending what had been an exclusively male honour for 800 years’.   Thus the EDP reported the momentous events at St. Andrew’s Hall where two ceremonies were required to enter 212 women and an unusually large number of men to the freedom of Norwich.

2017
700th anniversary of the Freemen’s Registers

It is exactly 700 years since the first freeman name was recorded in the earliest Norwich register in July 1317. His name was Walter Fleighe and he was a butcher. Freemen in Norwich existed long before 1317, but their admission to the freedom was only recorded from that date in a book created for the purpose. This entry is the start of a series of registers which include all the freemen’s names up to the present day.

The Norwich Freemen have one of the best documented histories in the country.

As part of the 700 celebrations, they have commissioned an online database of the Freemen Registers which date from 1317. These registers list the names of every freeman in Norwich starting with Walter Fleighe, a butcher.

The database will include the names of freemen, or ‘citizens’ as they were also known, contained in the Enrolled Deeds. These survive for property transactions in the city from 1285.

Generations of freemen, from father to son and from master to apprentice, can be traced over 700 years. Since 2010, daughters of freemen have also been admitted to the freedom. With the names, trades and occupations of thousands of freemen, the database is a unique insight into the economic and social structure of one of England’s great cities over seven centuries.

This invaluable resource, Norwich Freemen Records Online, will be available free of charge from September 2017. The database is being built Dr Mark Merry and his team at the Institute of Historical Research, London and inputted by a team in Norwich, all experts in their field.

The first formal history of the freemen Buxom to the Mayor: A History of the Norwich Freemen and the Town Close Estate was written 30 years ago. One of the original authors, Dr Elizabeth Griffiths, has updated the book for the 700 celebrations and arranged it in the six themes, in boxes below, to highlight the ups and downs of the Freemen’s story over the past 700 years.

1. Who were the Freemen?

5. Revival of the Freemen

6. Women and the Freedom